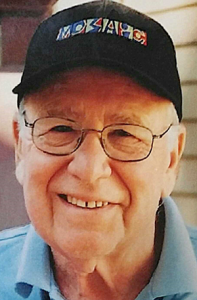 Lawrence “Larry” Sperling died peacefully in the warmth of his home in Ann Arbor, Michigan at the age of 86, on August 3, 2018, surrounded by all of his children and after a week of loving visits and calls from all of his daughters- and son-in-law, grandchildren, great-grandchildren, and lifelong friends.

He is survived by the love of his life, Doris Sperling, who he met on the train on the way to start their first year at the University of Michigan, and to whom he was married to for over 65 years. He never stopped admiring her, supporting her and being amazed by her extraordinary efforts to bring quality educational opportunities to all of Ann Arbor’s children through her teaching, expertise on classroom assessment and founding of organizations to strengthen reading for less-advantaged young people, and to provide students more personalized learning as well as youth theatre experiences. Their songs were “I Only Have Eyes for You” and “Body and Soul,” which he sang to her often.

They remember him as the wisest person they knew; a personal counselor to all, who advised each to find their own spark, follow their own path, fight for those most persecuted and to remember that nothing surpasses the joys of a loving, supportive family. He is remembered for his passion for progressive politics, legal and social justice for those least well-off, Michigan football and basketball, tennis, Detroit Tigers, Haagen-Dazs Coffee ice cream, classic Broadway Musicals, Beethoven’s Violin Concerto, Paul Robeson’s and Harry Belafonte’s music. He was usually — though not always — tolerated for his bad jokes, puns and remarkable capacity to find a song for any word or phrase suggested by a grandchild.

Larry grew up in Brooklyn, New York, born in 1932 to Michael and Elizabeth Sperling. He had a close life-long bond with his sole sibling, Stuart Sperling and deep affection for his wife, Irene. He attended James Madison High School in Brooklyn where he served in student government, was sports editor of the newspaper and played varsity baseball. He received his BA at the University of Michigan in 1953. He received a J.D. with Distinction from Michigan Law School in 1956, where he was Associate Editor of the Michigan Law Review and Order of the Coif.

After law school, he was chosen for the Honors Program at the U.S. Department of Justice. Following his service there, he returned to Ann Arbor to set up his own legal practice. He eventually merged his practice with one of the oldest law firms in Washtenaw County to create the firm of Pear, Sperling, Eggan and Daniels where he was still practicing law at 86 years old, until two weeks before his death.

He had a distinguished legal career. Among his legal victories included, the first federal court of appeals case finding a constitutional right under the Equal Protection Clause for girls to be able to play on boys athletic teams (Morris v. State Board of Education, 422 F2d 1207 (1973); the first federal case creating a right for public high school students to not be expelled for their expression and speech without due process;  (Vought v. Van Buren Public Schools, 306 F Supp 1388 (1969), and one of the first cases to establish a constitutional right to not be denied participation on public high school athletic teams due to disability. He was also the first lawyer for Domino’s Pizza. He drew up their first franchising agreement, was on their first Board of Directors, and is credited with helping prevent its bankruptcy when they were first starting with only two stores. For many years he was the City Attorney for Ypsilanti, was one of the first Presidents of the Washtenaw County Legal Aid program, and a former Board member and Vice-President of the Washtenaw ACLU.

While he engaged in various forms of civil and criminal work over the 60 years of his legal practice, he was a particularly fierce defender of those hurt on the job, or who had worked for years, but then experienced disability. He spent much of his later years representing those seeking Social Security Disability benefits who he defended not only in court, but in the court of public opinion; arguing that among the hundreds and hundreds of clients he got to know and represent, he found only the hardest working people who struggled to work through disabilities for years until they simply couldn’t any longer. He had close working relationships and strong respect for many lawyers he practiced with or partnered with over the decades, including his long-time Sunday tennis partner and law partner, Ed Pear. Yet, no two work partners could ever match the devotion and appreciation he felt toward his two trusted, indispensable aide-de-camps: Betty Ring and Sharon Anderson, who each worked with him for 30 years.

Larry was also a top senior tennis player. He won several Ann Arbor City Tennis Championships for those over 40; won several state father-son championships in both Michigan and Wisconsin with his son Mike, while also receiving top 10 national rankings with Mike in the senior father-son division. He once reached the finals of National Grandfather/Granddaughter Tennis Championship with his granddaughter Jackie.  He had Michigan football season football tickets for over 65 years, always attended with his wife and often one or more of his children. He was always proud to have traveled by car with friends to both Michigan’s famous 9-3 victory in the 1950 “Snow Bowl” at Ohio State and their 14-6 comeback win in the 1951 Rose Bowl.

He was a strong and active supporter of the socially-beneficial organizations founded by members of his family. He made significant commitments time-wise and financially to support the organizations that were founded or co-founded by his wife Doris, including the Ann Arbor Young People’s Theatre and the Family Learning Institute (FLI) – which focuses on supportive, one-on-one tutoring for children who had fallen two grades or more behind in their reading. He was also a long and passionate supporter of the Mosaic Youth Theatre of Detroit, which was founded and run by his son Rick for over 25 years. In that light, the family asks that in lieu of flowers or other gifts to our family, that contributions go to the Mosaic Youth Theatre of Detroit.

To contribute, go to this link https://mosaicdetroit.org/donate-now/ and enter “Larry Sperling” when asked to whom the contribution is dedicated. All contributions dedicated to Larry Sperling will go to funding a one of his great loves: seeing the incredible young people of Mosaic Youth Theatre of Detroit perform a major musical production every summer.

The family is thankful for the conscientious care he received in the University of Michigan hospital in the cardiology and cardiology ICU units and is grateful beyond words to Terri Collison of Senior Key Care and her team for their loving and superior caregiving.

94 thoughts on “In Loving Memory”